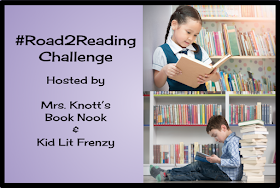 All journeys have a starting place.
This is a weekly place to find books and tools
that you may use with readers
at the start of their independent reading journey.
Join in the conversation at #road2reading.

One of my favorite genres has always been historical fiction.  Some of my favorite middle grade reads have been set in history.  However, sometimes a setting that takes place in the past can be tricky for readers to understand because they don't have enough background knowledge about it.  But, a good series can put that to rest!  Fans of The Magic Tree House series will tell you they have enjoyed traveling to many different places and times with Jack and Annie!  Here are some new series that are tackling time and place travel!

At the Heels of History:  Filigree's Midnight Ride
written by Pam Berkman and Dorothy Hearst
illustrated by Claire Powell

Your students may have heard the name Paul Revere... they may have even heard of his infamous Ride... this book brings the facts to life in a way that is memorable and fun for young readers.

The book introduces us to Filigree, Paul Revere's dog.  However, before he was Filigree, he was Pudding who was owned by a British loyalist.  But now Filigree wants to show he's a Patriot dog and fight against the British soldiers.  The other dogs... and cat... don't believe in Filigree, but Frances, Paul Revere's daughter does!  When Mr. Revere leaves on an urgent assignment, it's Frances that encourages Filigree to stay with her father and help keep him safe.

The rest of the story follows Filigree as he accompanies Mr. Revere on his very important ride.  There are several parts of the story that are different from the infamous story most of us are familiar with.  I liked how the authors included information about this in the backmatter of the story.  Berkman and Hearst explain that the story most of us have heard about Paul Revere's Ride and "The Shot Heard 'Round the World" are based on written stories and not actual facts.  Revere's now infamous ride was made famous in a poem that dramatized the ride when in reality he would never shout "the British are coming" because the area he was riding through was full of British patrols!

This is a quick read (under 200 pgs) and the book is a small, trim size.  Since the story is told by animals, it will appeal to young readers, some who have not even heard of Paul Revere!  It's exciting that a whole new generation of readers will be able to access history through these chapter books.  This book will also be accessible to older readers who are in 5th grade who are starting to study the American Revolution time period.  This is a perfect book to use as a quick class read aloud or for students to read independently as a way to reinforce information they are learning.

This is the first book in the series and I'm interested in seeing where the authors take readers in history.  To learn more about the series, be sure to visit the Heels of History website.  There is a lot for young readers to explore and learn and additional information for parents and educators on the site.

Here's more about the authors and illustrator:

Dorothy Hearst is the author of the Wolf Chronicles trilogy; Filigree’s Midnight Ride is her first book for young readers. She loves writing about canine characters, birds, and other creatures who can give us the chance to see ourselves in new ways. She is an acquiring editor, a martial artist, a self-defense instructor-in-training, an avid hiker and reader, and a dog lover. She is not entirely domesticated, but is very food motivated. Learn more at her website, or on Twitter: @DorothyHearst

Claire Powell is an illustrator, writer, and designer who lives and works in London. She has spent several years as a design director in the world of channel rebranding working for clients such as Nickelodeon, BBC Three, CBBC, and BBC One. To learn more, visit her website.
Instagram: misspowellposts

Thank you to Barbara at Blue Slip Media for the review copy.


Check out these other time traveling adventures!

Time Dogs:  Balto and the Race Against Time
written by Helen Moss
illustrated by Misa Saburi
This series takes us back in time with some senior-age dogs... but when they time travel they go back to when they were puppies and they find themselves assisting other dogs that are well-known in history!  In the first story, Baxter and his four dog-friends time travel back to Alaska and meet up with the famous sled-dog, Balto.  Balto and his fellow dogs are in a race against time to bring some important serum to Nome in order to help sick children.  Will Baxter and friends be able to help?  And will they get back to the time machine in order to get back home?
Young readers will enjoy this chapter book adventure series, especially since it is told from the dogs' perspective.  A series that is similar to the popular Ranger in Time series, but a little bit shorter in size.
There is already a second book in the series that is published (Time Dogs:  Seaman and the Great Northern Adventure) and the third book will publish in March.

Magic on the Map: Let's Mooove!
written by Courtney Sheinmel and Bianca Turetsky
illustrated by Stevie Lewis
Ready to learn more about the United States?  Join twins Finn and Molly as they time travel all over the USA in a camper with a computer inside named PET (Planet Earth Transporter).  In this first adventure PET brings them to the state of Colorado.  Finn and Molly arrive at a cattle ranch and they quickly figure out they have some work to do before PET will bring them back home to Ohio.  When the prized cattle, Snowflake, disappears, Finn and Molly race to get her and bring her back to the ranchers.
As readers go through the story, information about the state is told or illustrated.  For example, in this book, the state flag of Colorado is illustrated at the beginning of a chapter and information about the states that border Colorado come up in the story.  Further information about the state is listed in the backmatter.
The second book in the series, The Show Must Go On, brings Molly and Finn to the state of New York!  The third book will publish in January and take the twins to the great state of Texas!
I think readers are really going to enjoy this series and visiting the different states.  The books are about the length of the I Survived series and with the predictable events in each book, they will be great for younger readers.  I recommend libraries with 2nd-5th grade readers looking into this series!


Hope these time traveling stories find a way into your libraries and the hands of your readers!