When you think back to your childhood, what are the things that made you truly happy?  Perhaps at the top of the list would be good friends and a strong imagination.  For young Jae, these are the things that keep him going after immigrating to a new country.  And it's within this shared experience, other children may relate and then learn from young Jae. Rosa's Song
written by Helena Ku Rhee
Pascal Campion
published by Random House Studio
The story starts out, "Jae was new to the country, the city, the building."  He misses the comforts of his home and is sad without all that is familiar to him.  It's after his mom suggests he meets other children in the building and he meets Rosa and her parrot, Pollito.  Rosa helps Jae open up his imagination and see things with fresh eyes and a new perspective.  Pollito's song brings a smile to Jae's face and makes his heart happy.  But suddenly Rosa is gone and has left Pollito to Jae's keeping.  Although Jae is sad, it's through Pollito's song and the gifts of imagination that Rosa left that allow Jae to open his heart and meet new friends. 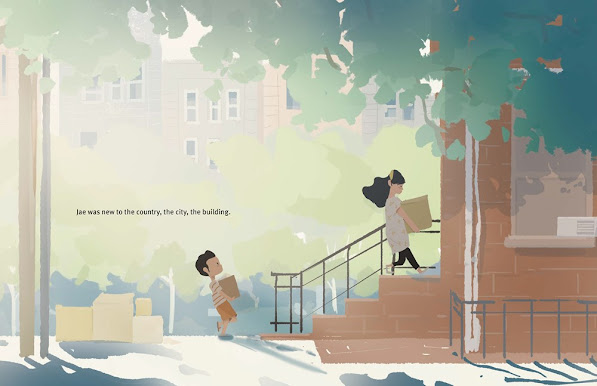 The story ends with a note from the author about the immigration experience and the transience it can bring, whether due to financial situations or immigration status.  Friendships can be disrupted, which is hard for young children to understand.  Author Helena Ku Rhee's previous collaboration with illustrator Pascal Campion, The Paper Kingdom, is similar to this one as it helps children understand and value all experiences that humans may experience. 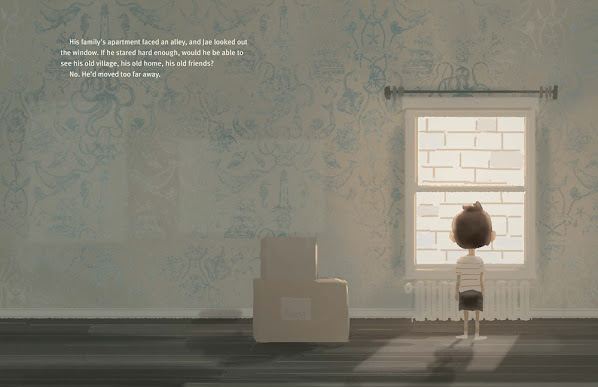 I love the possibilities of using this book with young children.  First of all, the discussions about imagination would be so powerful.  I would love to hear children's ideas on how using their imagination is helpful to them.  Look deeper at Campion's illustrations - how did Rosa and Jae use things around them as a tool for play?  The theme of friendship is also important in this story.  How did Rosa's friendship leave a lasting impact on Jae even after she left?  While the idea of immigration or moving may be new to some readers, for others this may be a powerful story that lets children feel seen and heard.
This is a beautiful book that I recommend being on your library shelves this fall.  Booklist had wonderful things to say too:
★ "Striking and raw…. Readers will share the sadness of Jae's loss, but only after seeing Rosa and Jae's joyful playing—a happiness that's distinct to childhood." —Booklist, starred review
More about the creators of this book:

Helena Ku Rhee grew up in Los Angeles, but has also lived in various parts of the U.S., Asia and Europe. She has a soft spot for small, stout animals and loves to travel far and wide across this beautiful planet, counting among her favorite journeys a camping trip in the Sahara Desert, a swim with elephants in Thailand and a horseback-riding tour of Easter Island. She is also the author of The Paper Kingdom, which was included on many year-end Best Books lists, including NPR, BookPage, Kirkus, Parents Magazine, the Los Angeles Public Library, and Amazon, among others. Helena works at a movie studio by day, and dreams up story ideas in her spare time. She currently lives in Los Angeles. Visit her at helenakrhee.com.

Pascal Campion is a prolific French-American illustrator and visual development artist whose clients include: DreamWorks Animation, Paramount Pictures, Disney Feature, Disney Toons, Cartoon Network, Hulu, and PBS. Working in the animation industry for over 15 years, he has steadily posted over 3,000 images of personal work to his "Sketches of the Day" project since 2005. He lives and works in Los Angeles, CA. Follow him on Instagram @pascalcampionart or Twitter @pascalcampion.
Thank you to Barbara at Blue Slip Media for the review copy!
Michele Knott at 12:30 AM
Share